Radical Objects: What's in your handbag? #2

Below are some images gathered at recent Wonder Women events where women were asked to share an object which they carry around with them which says something about what it is to be a women in Manchester in 2013. What would you share? Upload your images to Twitter @WonderWomenMcr.
﻿
﻿ 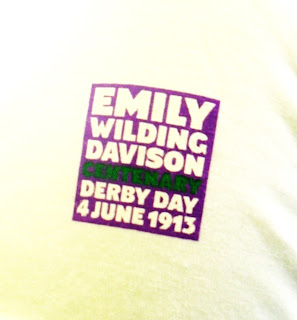 I gave a tour of the People’s History Museum (PHM) last Friday as part of Wonder Women: Radical Manchester; a series of events that explores and commemorates women’s history (or herstory). One of the most interesting things about the objects we looked at during the tour, was how they show a change in the argument about why women should not have the vote. For instance in George Cruickshank’s 1853 The Rights Of Women or the Effects of Female Enfranchisement the satirist made clear points about why women should remains disenfranchised. Women, argued Cruickshank, were only interested in the superficial, and could not deal with the complexity of political argument. Consequently the women in Cruickshank’s print fawn over the handsome candidate ‘ladies’ Sir Charles Darling, while ignoring the great political economist and ‘gentlemen’s’ candidate Screw Driver.


In the galleries there is another print that reflected women’s supposed inability to cope with complexity of political debate. Here the women fawn over the candidate ‘Fitzbland’ whose popularity – like darlings – is based on looks rather than political acumen. The unknown artist proposed another argument against votes for women, namely as a sex women did not have the physical capacity to survive the maelstrom that was Victorian politics. This is show by the speakers need to lean on her chair while addressing the group, and further witnessed by the woman who has fallen asleep.

By the 1900s, however, arguments against women voting had to some extent changed. In John Hassall’s A Suffragette’s Home (around 1912) a working class man comes home from a day’s labour to find that his suffragette wife has gone out campaigning, leaving his children abandoned, his house un-cleaned, and his tea not made. Gone was the argument that women were incapable of dealing with masculine world of politics, and instead the suggestion that were they to become active participants in the democratic process, there would be no time to fulfill their household chores.

The reason for the change is I think to do with the nature of the demand for the vote. Crudely speaking, mid-19th century suffrage campaigners focussed on a middle-class intellectual argument that men and women were equal. And as such women had a moral right to vote on the same terms as men. The prints counteracted this, suggesting that men and women were inherently different, and the latter had neither the capacity to understand the nature of political argument, nor cope with its physical rigour. In the latter part of the 20th century there was a growing argument that women needed the vote, not because they had a moral right to it but because it would improve their lives. This was an argument linked especially to working-class women, and one laid out by A. Maude Roydon in ‘Votes and Wages’.

It is perhaps unsurprising that the arguments had changed. When working class women who often combined their domestic roles with long-hours in tough jobs, became ever-more vocal in their demands for the vote, anti-suffrage campaigners could hardly claim that the female sex had not the physical capacity to deal with politics. Thus the argument changed, to one suggesting that voting and the demand for it impacted on women’s moral duty to raise and support her family. The objects on display at PHM show that just as the pro-suffrage campaign changed its arguments and its tactics over the course of demands for female suffrage, so too did the arguments which opposed it.

This blog post was written by Chris Burgess, Collections Access Officer at the People's History Museum.  You can find out more about Chris' work by reading his blog Unlocking Ideas or following him @UnlockIdeas.  The tour was a sell out and we are hoping to shortly have a repeat date, leave a comment below if you would like know when that will be.
Posted by Wonder Women at 12:58 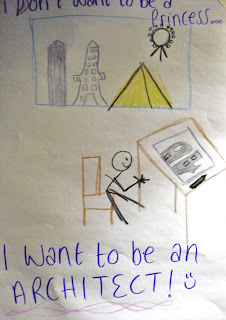 Last week saw the first of three 'Future Perfect? Radical Women' discussions at The Royal Exchange. As part of the Theatre’s 'Truth about Youth' programme (supported by the Co-operative Foundation), young women aged 14-21 have been invited to come and take part in this free mini project debating, discussing and meeting the radical women of today.

In week 1 the girls were considering career choices. They were asked to complete the following statement:'I don't want to be a princess, I want to be a...' From truck drivers to neuroscientists the images below offer an insight into the ambitions of this group of women. Find out more about these events here: http://www.royalexchange.co.uk/event.aspx?id=690 and look out for future posts about the discussions. 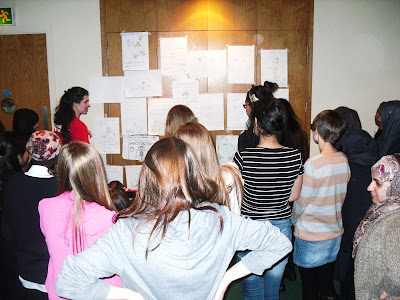 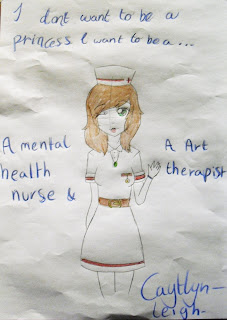 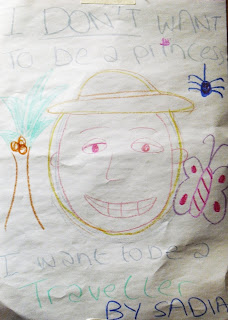 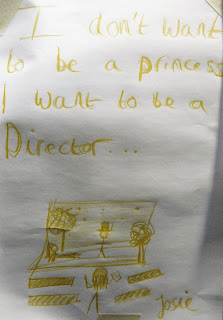 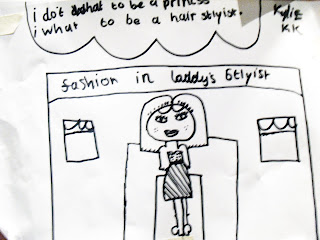 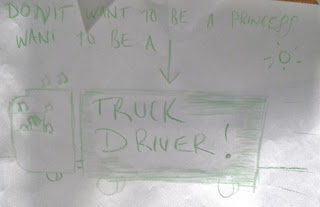 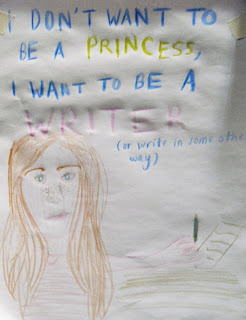 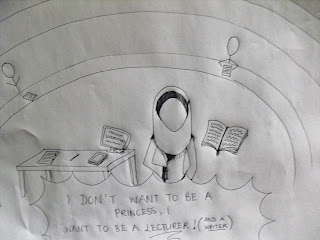 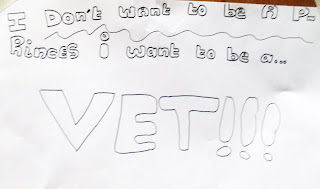 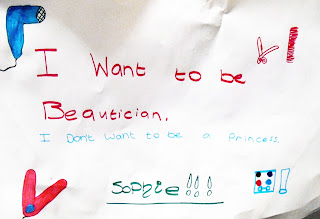 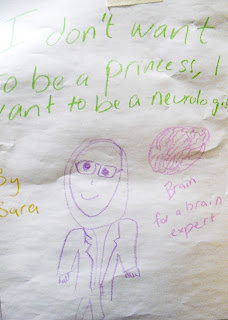 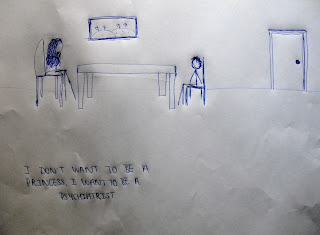 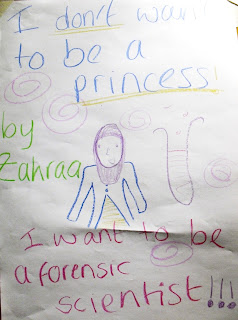 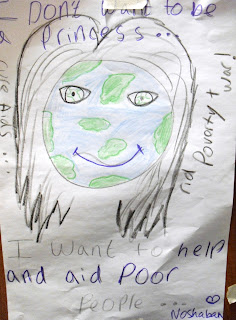 Handbags carry stories: Tell us yours 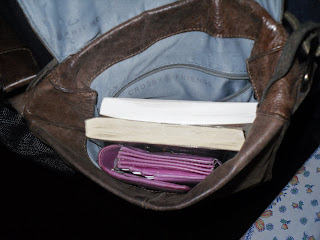 You may have noticed we have developed a rather strange habit: photographing the inside of women's handbags. Sound silly? Well, perhaps it is. But there's a reason we've gone all nosey.

We're gathering the stories hidden behind the radical objects that the wonderful women of Manchester carry around in their handbags.  From the obscure to the sentimental we like to think that each object paints a picture about the lives of women in Manchester in 2013.

Why do we carry what we do? And what stories lie within these objects?

Throughout the Women Women: Radical Manchester season we will be sneaking a peek into the handbags of women and adding more object pictures to the blog and Twitter feed each week.

Got an object/story to share? We can't wait to hear it. Join in here @wonderwomenmcr #wonderwomenmcr.
Posted by Wonder Women at 22:19

'The Pankettes' at The Royal Exchange 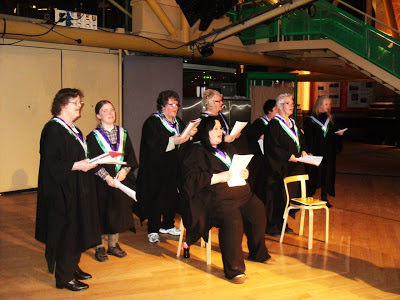 Meet 'The Pankettes', the women's choir based at the former home of Emmeline Pankhurst. Now known as The Pankhurst Centre this modest Georgian property on Nelson Street in Manchester was the home of the world famous leader of the Suffragette Movement, whose militant protests were instrumental in the introduction of voting rights for women during the Edwardian era. Emmeline and her daughter Christabel together formed the Women's Social and Political Union in 1903. Nowadays, The Pankhurst Centre is a women-only space of learning, relaxing and socialising for women from all over Manchester. A museum in the centre displays the work and struggle of women suffragettes, as well as reflecting everyday domestic life in the Pankhurst parlour.

On Sunday 3 March 'The Pankettes' gave audiences a free, informal performance within the Great Hall at The Royal Exchange and we were there to enjoy their lovely voices as part of the Wonder Women: Radical Manchester season. 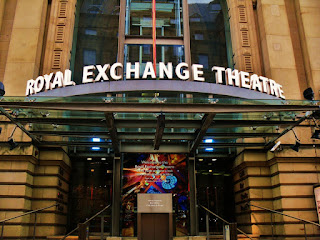 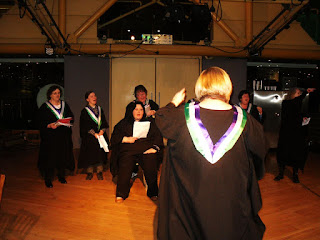 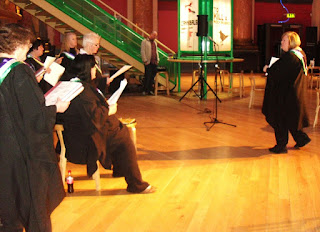 The Pankhurst Centre is open Monday to Thursday 10-4, closed Friday to Sunday and well worth a visit. What better time to drop in than during the Wonder Women: Radical Manchester season (only women though of course!)
Posted by Wonder Women at 16:39


Including previously unseen photographs of cultural icons, pictured in moments of often unguarded, emotionally-charged intimacy, Developing: Photographs by Mary McCartney, a new exhibition of the photographer’s work shows at The Lowry, between Saturday 16 March – Sunday 9 June 2013.

At the heart of the exhibition is a series of images that provide a window into the lives of world’s most influential, recognisable and often radical women including Tracey Emin, PJ Harvey, Joni Mitchell, Gwyneth Paltrow and Vivienne Westwood.  Working with some of the fashion industry’s most prominent designers and from assignments with publications including Harper’s Bazaar and Vogue, the portraits featured in Developing provide a glimpse of the inspirations, histories and personalities of her subjects.


To find out more about Developing: Photographs by Mary McCartney visit: www.thelowry.com

Women in Science Then 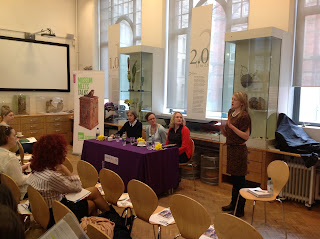 Fri 15 Mar: Women in Science Then

This event will begin at Manchester Museum where there will be a chance to see museum objects linked with these women.

Radical Objects: What's in your handbag? #1

As the Wonder Women programme of events got underway last week, we went along to the launch of the Head to Head exhibition at Castlefield Gallery and asked: what's in your handbag? The objects you carry around with you each day may not seem to hold much significance, but these objects tell a story. They offer a shapshot of what it means to be a woman in Manchester in 2013. Browse through the collection here and if you have an object you would like to share please do so on Twitter #wonderwomenmcr!

Hayley Newman and Emily Speed's work forms Castlefield Gallery’s annual Head to Head show. Hayley's jacket was made for Newman’s piece ‘Facing,’ a performance art commission which was part of the ‘Between’ season at The Cornerhouse from March to September 2012. Emily shares her craft knife; essential for crafting on the move!


Exhibition curator Clarissa knows her way around Manchester but still carries a compass around in her handbag as a kind of ‘lucky charm’.The bicycle torch comes in handy when cycling. Both items relate to the theme of journeying, both helping in getting from A to B.


Charlotte’s camera case represents her love of photography. Charlotte is a volunteer at Castlefield Gallery and a recent Fine Art graduate.

Since sadly losing her father before Christmas, Annie has carried a rose quartz in her pocket as reminder of him and of the presents they exchanged.
Elizabeth’s diary let’s her know where she is, and where she’s going to wake up.


Laura was preparing a workshop to be delivered to second year MMU students on the topic of ‘Making Lunch’. Laura is involved with the publication ‘Feast’- a journal of contemporary visual art and food.

Natalie poses with a copy of ‘Shrieking Violet’ the fanzine of which she is editor. Natalie’s blog of the same name won the best arts and culture award at the 2011 Manchester Blog Awards.

Jennifer received this watch as a gift from her boyfriend when he left to work in the US. This object reminds Jennifer of the difficult decision she made in deciding not to follow him but choosing instead to pursue her career in Manchester.

On a recent train journey back from Cambridge, Sarah found herself with a messy salad and no spoon…desperate to not be late to a launch event she innovatively fashioned a utensil from the toothpaste tube she conveniently had in her handbag…the same tube we found on her person this evening. Rather a radical object!

We will be asking 'What's in your handbag?' at subsequent Wonder Women events throughout March and early April so stay tuned for future posts!
Posted by Wonder Women at 11:48