From suffragette smashing windows in the gallery to a breathtaking exhibition of female surrealists, Manchester has a rich heritage of stereotype-smashing women. Yet society, and the art world, is still dominated by men.

Curated by The Feminist Takeover team (made up of feminist artists, curators, writers and researchers, protagonists from No More Page 3, For Book’s Sake, Mighty Heart Theatre and Stirred Poetry), The Feminist Take Over Thursday Late launches the Wonder Women’s week of events for International Women’s Day 2015.

This Thursday Late will run from 5pm-8pm, with events beginning in the Atrium at 6pm. Audiences are invited to tour the new contemporary exhibition that we have installed within the permanent collection. Live performances are scheduled all evening throughout the gallery and within the Feminist Takeover hub in the Atrium, and audiences are welcomed to explore the issues for themselves via the interactive arts & artist discussions that will be occurring throughout the evening in the Atrium.

By giving self-identified women a voice in the context of Manchester Art Gallery we aim to encourage discussion and explore the issues around the representation of women within the gallery, the art world and the wider society.

This is an emergency.

Join us in smashing patriarchy with art!!!

Artists & performance line-up to follow.
Posted by Wonder Women at 11:03

The Working Class Movement Library will celebrate International Women’s Day on Saturday 7 March at 2pm with a talk by Tansy Hoskins about her book Stitched Up: the Anti-Capitalist Book of Fashion.  Ballad singer Jennifer Reid will perform alongside the talk.

Winner of the ICA Bookshop Book of the Year 2014, Stitched Up delves into the alluring world of fashion to reveal what is behind the clothes we wear. Moving between Karl Lagerfeld and Karl Marx, the book explores consumerism, class and advertising to reveal the interests which benefit from exploitation.

Tansy dissects fashion’s vampiric relationship with the planet and with our bodies to uncover what makes it so damaging. Why does ‘size zero’ exist and what is the reality of working life for models? In a critique of the portrayal of race in fashion, the book also examines the global balance of power in the industry.

Stitched Up provides a unique critical examination of contemporary culture and the distorting priorities of capitalism.  Alongside this Jennifer Reid’s songs, drawn from the Library’s vast collection of songbooks and songsheets of protest and rebellion, will form an apt commentary.

This event is part of Wonder Women: Radical Manchester.  It is free, and open to all. 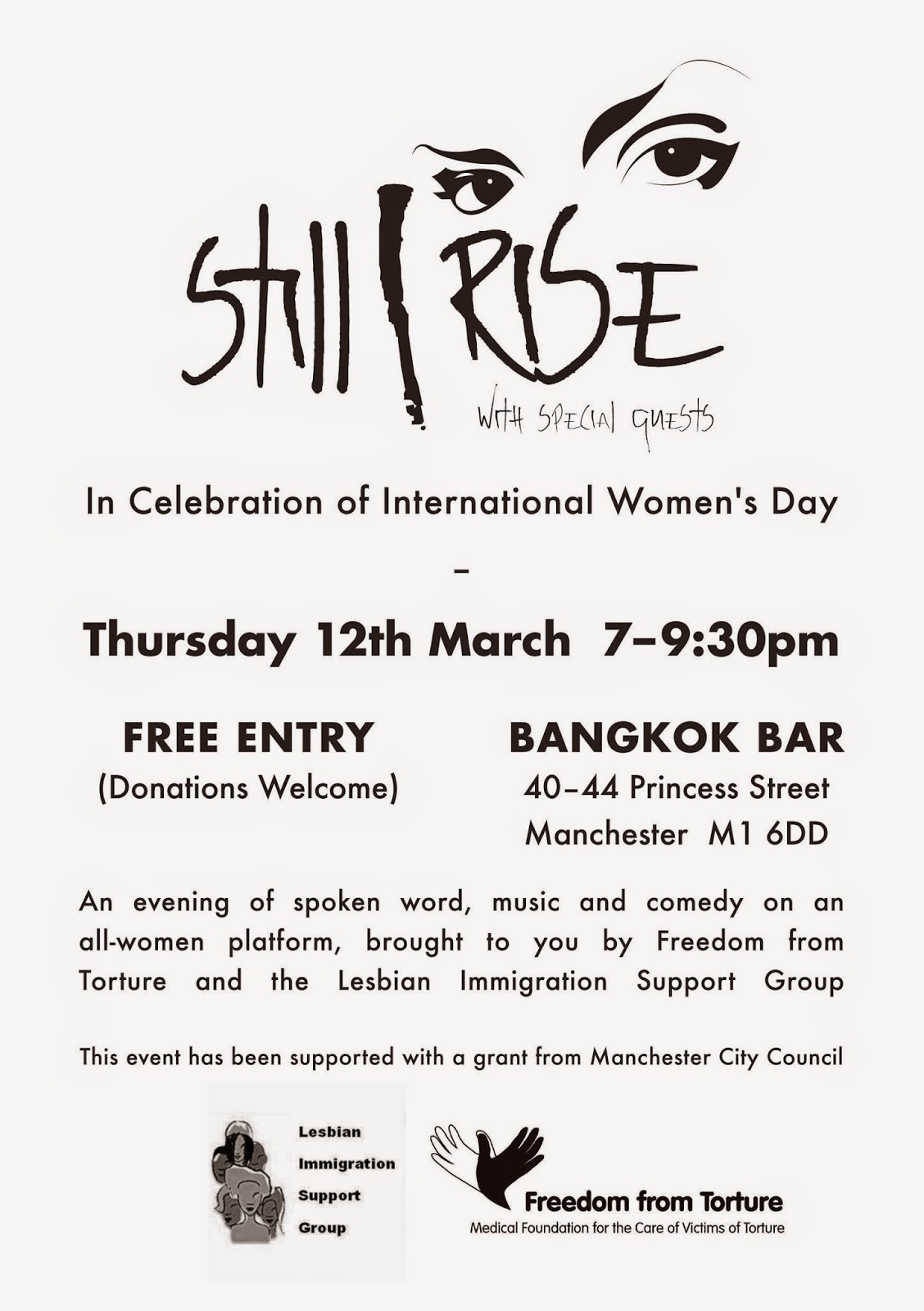 An evening of spoken word, music and comedy on an all-women platform

Celebrate International Women's Day with a fantastic evening of all-female talent, from spoken word and poetry, to theatre and music, hosted by Freedom from Torture and the Lesbian Immigration Support Group.
Inspired by the late Maya Angelou, Still I Rise highlights the talents and struggles of women from across the world. It will include a theatre performance by the women of the Lesbian Immigration Support Group and poetry readings by clients of Freedom from Torture. A £4 donation is suggested.
Special Guests TBA!
This event has been supported with a grant from Manchester City Council.
Thanks to robhelsby.com for the artwork.
Further information available on the website here
Posted by Wonder Women at 12:44

Reclaim the Night Manchester 2015 - Light up the city, fill it with noise 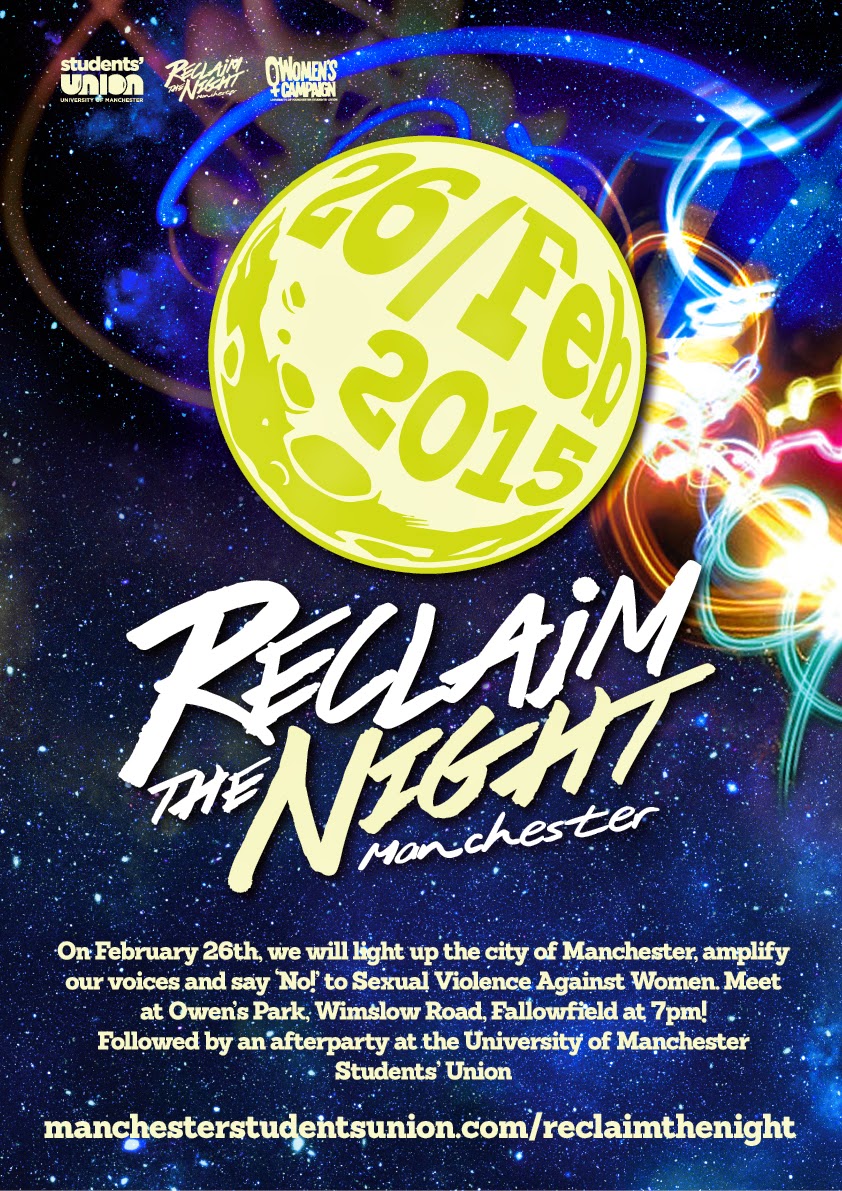 Key Information
On Thursday 26 February, we Reclaim the Night and raise our collective voices against street harassment, violence against women, rape culture and victim blaming.

The march starts at Owens Park, Wilmslow Road, Fallowfield at 19:00. A neon parade will head down Wilmslow Road towards the University of Manchester Students’ Union. The march will be led by a women’s-only block, open to all self-defining women, and followed by a mixed march open to all genders.

The evening continues with the Reclaim the Night After Party, a festival of the finest women speakers, performers and DJs at the Students’ Union Club Academy.

This year is going to be bigger, brighter and louder than ever. Bring your glow sticks, bring your friends and bring your voices.

Light up the city, fill it with noise

The Twitter hashtag for Reclaim the Night Manchester 2015 is #ReclaimtheNightMCR

This Valentines Weekend, Manchester is hosting the first National Festival of LGBT History.

Pop down to Central Library on Saturday and People’s History Museum on Sunday to hear about the lives of some fantastically inspirational women.

All events are free, no tickets required.

Christine Burns MBE was a leading figure in the campaign for trans rights for 15 years, helping secure the passage of the Gender Recognition Act in 2004. She also chaired the North West Equality and Diversity Group for many years and helped organisations develop equality strategy. Her widely praised books ‘Making Equality Work’ and ‘Pressing Matters’ are based on the various aspects of her work 10:30 - 11:00, Space 2


Historian Helena Whitbread will explore the live of Anne Lister 1791-1840 who is often dubbed the first ‘modern lesbian’. She was a Yorkshire landowner, industrialist, traveller and diarist who lived in Shibden hall, near Halifax. Her diaries were half written in code, and when the code was cracked it revealed Anne’s sexual exploits with other women, beginning in adolescence and continuing throughout her adult life. Helena Whitbread will also be available to sign copies of The Secret Diaries of Miss Anne Lister. 14:40 - 15:10, Space 2

Razia Aziz highlights her Spiritual Journeys
“During a half century which has taken me from Lagos to London to Brighton to Lewes, from a girls’ public school to Cambridge to company director, from an Indian Muslim heritage to the mixed blessings of the distinctive UK brand of 21st century diversity, from an ambition to be a professional singer to body work practitioner to Interfaith Ministry, I have often pondered upon the meaning and significance of my gender identity and sexuality in pursuit of an answer to the question we all ask at some point in our life: “What’s it all for?” 15:20 - 15:50, Space 3

Sunday 15 February - People’s History Museum
Sheila Standard discusses her experiences at Greenham Common, a personal reflection of one of thousands of women discovering the power of working together, singing, being silly, the wit and repartee, fear and bravery, that goes with bringing fences crashing down, to the mockery of militarism. A women’s movement that conflicted and then embraced sexuality, and stood up to the hateful press, and “respectable society”, embracing freedom, and our right to struggle against the holocaust. 11:30 – 12:00, Changing Exhibition Space

Dr Sonja Tiernan will explore the lives of Esther Roper and Eva Gore Booth. This formidable lesbian couple who lived together in Rusholme from 1890s and who defended working class women’s rights including those of mill workers, barmaids and flower sellers. They also established Urania, a pioneering covert journal on gender and sexuality
In the People’s History Museum foyer Warp & Weft’s Jenny White has put together a display on the lives of Esther and Eva, including Helen Davies’ craftivist crochet mask of Esther Roper which was used to yarnbomb a man statue in Manchester Town Hall. 14:00 – 14:30, Coal Store
Dr Kate Cook will speak about her involvement in the 1990s struggles to end rape and about the involvement of lesbian feminists in the movement against violence against women and girls. 14:00 – 14:30pm, Archive space
Prossy Kakooza will talk about how she rebuilt her life in the UK after experiencing abuse and torture in Uganda. “Many LGBT people like myself run from persecution to seek asylum in nations like the UK thinking they’ll immediately be safe. But most times seeking asylum makes you enter what feels like another form of persecution with having to prove your sexuality to the immigration system. When I asked for asylum, on many levels, it felt like jumping from a frying pan into a fire. In a series of such intrusive and embarrassing questions, I was asked to prove I was gay. How on earth was I or anybody else supposed to do that?!” 14:50-15:10, Coal Store

Linda Bellos will explore some of her historic achievements. Actively involved in community politics since the mid 1970’s, she came out as a lesbian in the late 1970’s and joined the Spare Rib Collective in 1981. She helped organise the first Black Feminist and the First Black Lesbian Conferences. She argued strongly against the notion of a ‘hierarchy of oppression. In 1987, as Chair of the London Strategic Policy Unit, she was responsible for introducing Black History Month to the UK. She has become a leading authority on equality and human rights law and its practical application across the public sector. 15:30-16:00, Coal Store

Cath Booth will be discussing Lesbians and Gays Support the Printworkers (LGSP): a group in London supporting workers sacked by Murdoch in 1986, following closely in the footsteps of LGSM during the miners’ strike. The group took part in marches and actions throughout the year of the strike, making alliances with sacked strikers and other support groups. They produced regular bulletins, badges and posters, and monitored virulently anti-gay articles of the Sun. 15:30 - 16:00, Archive Space
Posted by Wonder Women at 14:16