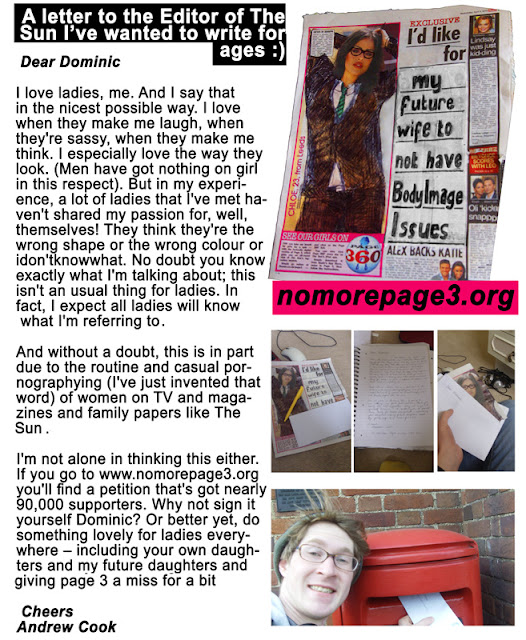 We are Jenny & Sarah & we wanted to welcome you to 100 Deeds! 100 Deeds is a project which came out of a conversation about the word ‘feminism’ and what that means to people.

We wanted to create a project which in someway marked the 100 year anniversary of the Emily Wilding Davison’s protest at Epsom Derby (4th June 1913) in which she stepped in front of a horse whilst protesting for women’s right to vote. It’s an iconic moment in British history – I don’t know about any other girls but I grew up knowing that I should vote before knowing anything about politics, simply because somebody had died for my right to. I think the both of us have a complicated response to Emily’s action – we’re not sure if it was heroic, or an act of terrorism. We’re not even sure if Emily did this on purpose.

What we do think is that there’s something in the Women’s Social Political Union slogan ‘Deeds Not Words’; we think that actions do often speak louder than words. We also think that opinions around gender quality are complex and diverse. Possibly 1 action cannot sum up what the feminism means to us now, but maybe 100 actions might get close.

So we’re asking people to do something really simple – to do a deed which promotes or represents what feminism means to you (don’t just talk about it) and then share it with us ... (see the image above for one of the first submissions)… We will share our findings online & in a showing at People’s History Museum. Anyone can get involved & become a modern history maker – take a look here: 100deeds.co.uk

Lillian Forrester: “We broke the glass of some pictures as a protest but we did not intend to damage the pictures”. 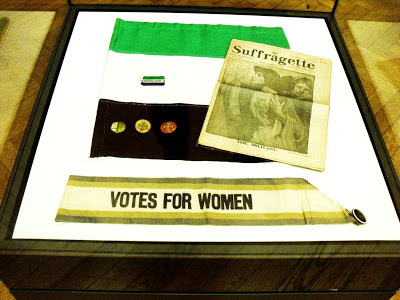 Today, 3rd April 2013, marks the centenary of an attack by three suffragettes – Annie Briggs, Evelyn Manesta and Lillian Forrester – on a number of pictures in the Manchester Art Gallery as part of the militant campaign for votes for women. The women were charged under the Malicious Damage Act; Lillian and Evelyn were sent to prison. The judge stated that if the law would allow he would send them round the world in a sailing ship deeming this the best thing for them...

This shocking moment has been revisited throughout the Wonder Women season. Manchester Art Gallery has programmed a number of key events throughout March and April including a number of curator-led gallery tours focusing on key items in the gallery's collection which have links with the Suffragette movement reflecting on the gallery as the site of radical political protest. 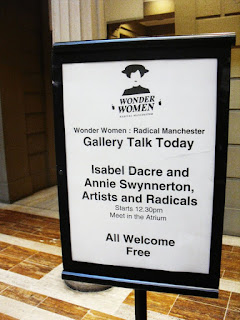 On Thursday 7th March we joined Fine Art Curator Rebecca Milner as she discussed the work of two female Victorian painters: Isabel Dacre and Annie Swynnerton. Both artists were involved with the Suffragette movement in Manchester and shared a lifelong friendship. The artists together founded the Manchester Society of Women Artists in 1876; Dacre also served as president of the organization. For a decade (1885–95), Dacre was a member of the executive committee of the Manchester National Society for Women's Suffrage. 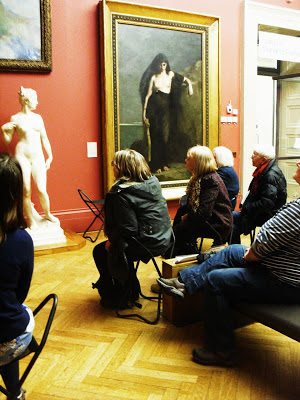 Annie Swynnerton (1844-1933) was born in Manchester and in 1922 became the first female associate of the Royal Academy since the 18th century. Rebecca Milner discussed Montagna Mia (circa 1923) meaning 'My Mountain'. 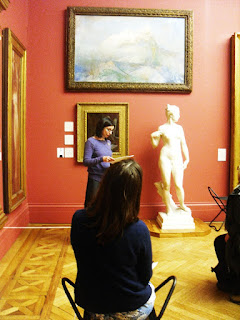 On the 14th March Janet Boston discussed some key items within the gallery's collection which were donated by Anna Philips of the Philips family of Philips Park Whitefield, Manchester. Anna came from a family of merchants who owned The Park from 1799 - 1948. The Philips became a prominent family in the area and the second generation of Philips to live at The Park went on to be prominent people within the political world as well as being involved in education and other philanthropic pursuits. 'The Philips of The Park' exhibition will run at Bury Art Museum from 16 March - 31 August if you would like to find out more about the family. More info about his exhibition can be found here. 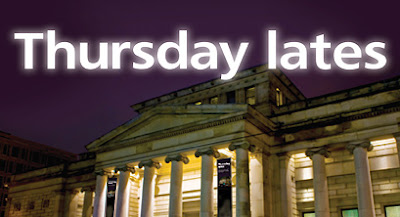 Each Thursday Manchester Art Gallery is open until 9pm and this month's 'Thursday Lates' programme has been dedicated to the 'Wonder Women: Radical Manchester' season. The gallery has hosted some extraordinary events including 'Un-Convention Women: Pussy Riot' (7th March) an evening about current issues arising in feminism around the world.  The event included spoken word and music performances, plus discussion of recent events in Russia with the Pussy Riot trials, with three actresses reading the testimonies from the Pussy Riot trials and performance and discussion from Viv Albertine (The Slits), Jayne Casey, Tracey Moberly, Alex Keelan, She Makes War and more.

'Delia Darlings' took place on 14th March. This event celebrated the life and work of electronic music pioneer Delia Derbyshire (1937-2001), one of the pioneering figures in the development of electronic music in Britain.  Delia Darlings are Manchester based artists working in music and sound who have been paying sonic homage to Delia Derbyshire by spending time with her archives at the University of Manchester. On the 21st March Canadian artist Michelle Teran presented 'Folgen' a performance lecture as part of the FutureEverything programme.  Exploring the intersections between social and technological networks, Teran’s work covers live installations, lectures, online performances and connected events.

On 28th March DJ Mary Anne Hobbs was in conversation with Dave Haslam discussing her current job as Weekend Breakfast presenter for BBC Radio 6 Music, her stint living on a bus in a car park and her role as a woman at the forefront of music broadcasting.

This Thursday 4th April the gallery will host the RNCM In The City Concert. Mezzo-sopranos Rosie Middleton and Lucilla Graham will perform a modern programme including works by Ella Jarman-Pinto and Royal Northern College of Music student composer Michael Betteridge, accompanied by pianist Pilar Beltran. Each piece will offer a new take on the theme Wonder Women: Radical Manchester. Find out more info about this event here.


You may also be interested in this fascinating article by Jeanette Winterson '100 years after the suffragettes' which was published in the Guardian on Friday 29th March.
Posted by Wonder Women at 14:37

Behind the Scenes at The Whitworth 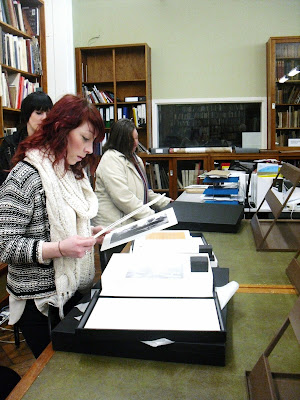 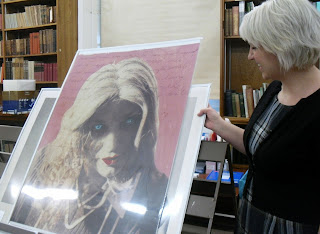 Behind the scenes in The Whitworth's collection lies the work of some incredible women artists whose work is not exhibited at present.
On the 23rd March curator Helen Stalker kindly allowed the public to engage with the work of three radical women artists: Lynn Hershman Leeson, Barbara Bodichon & Käthe Kollwitz. 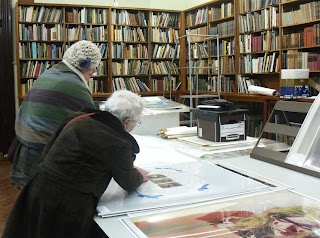 Lynn Hershman Leeson (born 1941) is an American performance artist and filmmaker whose work investigates the notion of identity and selfhood. She explores the things that make us unique. Between the years of 1974 and 1978, Hershman Leeson spent much of her time performing as an alter ego, the character Roberta Breitmore. Much of the work—drawings, photographs, clothing, medical records, letters, etc.—Hershman Leeson produced during the Breitmore years related to the character’s emotional and practical existences. This work anticipated the notion of the 'avatar' and of stolen identity years before the advent of the Internet. 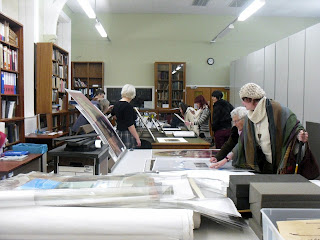 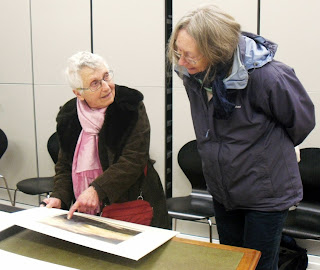 Barbara Bodichon (1827 – 1891) was an English educationalist, artist, and a leading early nineteenth-century feminist and activist for women's rights. In the 1850s Bodichon would meet with a group of friends in Langham Place in London to discuss women's rights.                                    The women would subsequently become known as "The Ladies of  Langham Place". This became one of the first organised women’s movements in Britain. They pursued many causes vigorously, including their Married Women’s Property Committee. In 1854 Bodichon published her Brief Summary of the Laws of England concerning Women. Listen here for an interesting discussion of Bodichon's life and work on BBC Radio 4 Women's Hour.

Käthe Kollwitz (1867 – 1945) was a remarkable German painter, printmaker and sculptor whose work dealt largely with issues of hunger, poverty and suffering. She is widely acknowledged as one of the most important female artists of the 20th Century.

Many thanks to Helen Stalker for her insightful discussions. Stay up to date with The Whitworth's Adult Programme events by following the link to the blog: here
Posted by Wonder Women at 20:27