The 16 Days of Action to End Violence Against Women campaign is fast approaching and we're really excited to announce that 16 Days of Street Art Action (Take 2) will be hitting the streets again this year!

There are two parts to the project this year

Part 1:
We are still keen to promote women artists in the Northwest so like last year we are looking for 16 female artists to create 16 pieces of street art, which will be displayed in Central Manchester on one of the 16 days. Our organisational role will be scaled back this year, so that means more freedom for you, the artists. The location of your artwork is down to you and you can choose whether to get permission or not! If you want your work to be one of the 'official' pieces for the campaign, you live in the Northwest and are available to create your work during the campaign period in Manchester (25th November to 10th December), all you need to do is send your idea to us before 1st November.

Part 2:
After last year's roaring success, lots of women contacted us and asked to get involved in the project, so this year we have decided to make it as inclusive as possible and are asking women from anywhere to create a piece of art (visual or performance based) on the theme described below, display it/perform it (preferably on the street) on one of the 16 days, take a photo/film it and send it to us. We will then post your art on the 16days of street art action facebook page. You can also tweet about it to your heart's content and encourage others to do the same using the hashtag #16daysofstreetartaction. Let's make the campaign go viral!

The Theme
This year's theme focuses more broadly on women's human rights and the importance of taking action to defend them. As feminist activism continues to rise across the UK, we want to use this campaign to draw attention to the many different ways in which women can and do take action to defend their rights and to strive for gender equality, whether that's by lobbying MP's or standing up for equality in their relationships.

Your mission is to create a piece of art which responds to the statement “ It's time...” and which reflects one of the ways in which we can work to achieve gender equality and women's human rights. For example:

“It's time...to educate young people about consensual sex in schools”

We think that all your creative responses to 'It's time' will encapsulate the diversity of feminist action and perspectives on how to create change. We would like all of the artists to include the words 'it's time' within their piece. However your response to the phrase is entirely up to you, if your image speaks for itself…. further words may not be necessary.

We're really excited about this year's action and we hope you are too. Start thinking about it, start creating, tell your friends about it and get in touch. Deadline for proposals for ‘official’ pieces by Northwest Artists is 1st November. Send all proposals and questions to: 16daysofstreetartaction@gmail. com

A seat at the table is not enough - Manchester, 7 November 1130am 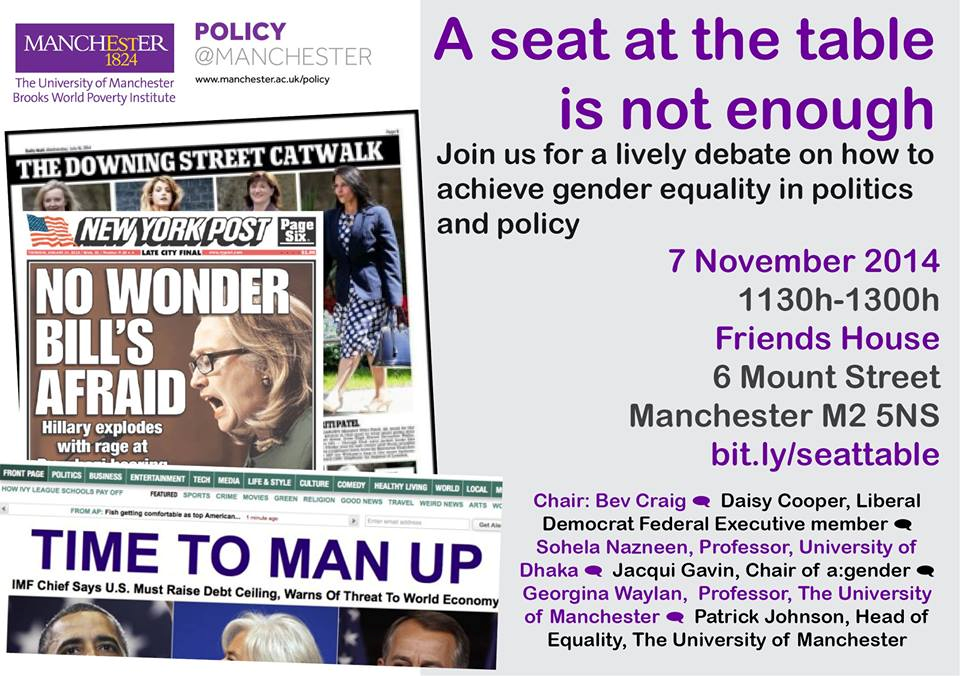 For booking information, visit this eventbrite link
Posted by Wonder Women at 10:13